I'm glad to announce that we have an addition to our team! Louise is joining the team of Skywatch and MyWorld! Give her a warm welcome!

And - like in MyWorld - we added the Followers Gadget at the bottom of each page - to make it easier for you to keep track of Skywatch!

But now I hand over to the dweliciously knowledgeable DewDrops - our Sky Goddess for another of her great Sky lessons!

Time for another post for the Skywatch 101 Series...
Here's lesson five. I have chosen a pyrocumulus cloud that I captured from an airplane as we flew by a fire on the ground. 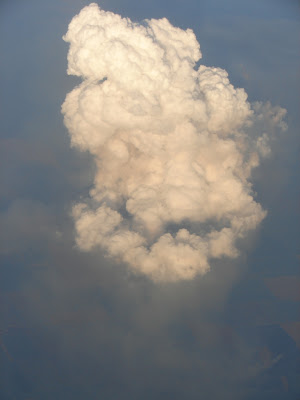 A pyrocumulus cloud is produced by the intense heating of the air from the surface. The intense heat induces convection which causes the air mass to rise to a point of stability, usually in the presence of moisture. Phenomena such as volcanic eruptions, forest fires, and occasionally industrial activities can induce formation of this cloud. Pyrocumuli contain severe turbulence which also results in strong gusts at the surface which can exacerbate a large conflagration. Large pyrocumuli can contain temperatures well below freezing, and the electrostatic properties of any ice that forms may also play a role. A pyrocumulus which produces lightning is actually a type of cumulonimbus, a thundercloud and is called pyrocumulonimbus.

This shot was taken flying out of Memphis, TN, in June 2008.
Lesson prepared and photograph taken by Dewdrop (aka Jennifer Bilak)

Thank you for being part of the Skywatch Community!
Your Skywatch Team:
Klaus | Sandy | Ivar | Wren | Fishing Guy| Louise
Posted by kjpweb on Thursday, November 06, 2008