We added the Followers gadget on the bottom of the page, to make it easier for you to stay on top of all things Skywatch Friday!

Want to be a Guest host, too? We have a new Page, that explains the "How To"!

Time for another post for the Skywatch 101 Series... Here's lesson six. I have chosen a solar halo, or an icebow. 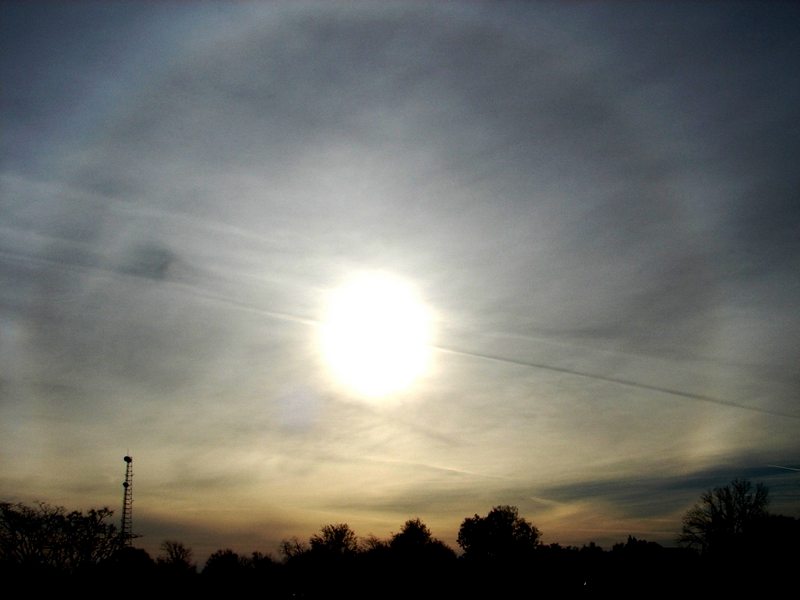 A halo (also known as a nimbus, icebow or Gloriole) is an optical phenomenon that appears near or around the Sun or Moon, and sometimes near other strong light sources such as street lights. There are many types of optical halos, but they are mostly caused by ice crystals in cold cirrus clouds located high (3–6 miles) in the upper troposphere. An icebow is phenomenon similar to a rainbow except that it is formed by the refraction of sunlight through cloud suspended ice crystals as opposed to raindrops or other liquid water suspended in the air. Generally the appearance is as arc sections as opposed to a full circle. Brighter sections usually occur above, below, and lateral to the center (where the sun is visible). These bright areas are referred to as "sun dogs," "parhelia" (plural -- see link to a previous post about sun dogs link). Those icebows that are caused by very small ice crystals are one colour, because diffraction blurs the colours together. A 22 degree icebow has red on the inside and blue on the outside.

This was my first time experiencing a complete solar halo.

Lesson prepared and photograph taken by Dewdrop
Please do read the rules, before you post!

Thank you for being part of the Skywatch Community!
Your Skywatch Team:
Klaus | Sandy | Ivar | Wren | Fishing Guy| Louise
Posted by kjpweb on Thursday, January 29, 2009